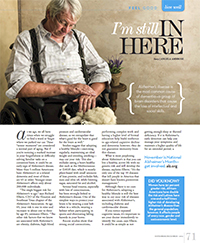 As we age, we all have times when we struggle to find a word or forget where we parked our car. These “senior moments” are considered a normal part of aging. But if you’re noticing a marked increase in your forgetfulness or difficulty solving familiar tasks on a consistent basis, it could be an early sign of Alzheimer’s disease. More than 5 million Americans have Alzheimer’s or a related dementia and most of them are 65 or older. Younger-onset Alzheimer’s affects only about 200,000 individuals.

“The single biggest risk for Alzheimer’s is age,” says Richard Elbein, CEO of the Houston and Southeast Texas chapter of the Alzheimer’s Association. At age 65, your risk is one in nine and increases to about one in three by age 85, estimates Elbein. “The
other risk factors that we know are associated with Alzheimer’s are obesity, diabetes, high blood pressure and cardiovascular disease, so we extrapolate that what’s good for the heart is good for the brain as well.”

Studies suggest that adopting a healthy lifestyle—exercising regularly, maintaining an ideal weight and avoiding smoking—may cut your risk. This also includes eating a heart-healthy diet such as the Mediterranean or DASH diet, which is mostly plant-based with small amounts of lean protein, and includes fish, nuts and olive oil, while limiting sugar, saturated fat and alcohol.

Serious head trauma, especially with loss of consciousness, has been strongly linked to Alzheimer’s disease. One of the simplest ways to protect your brain is by wearing a seat belt when in a vehicle, wearing a helmet when participating in sports and eliminating falling hazards in your home.

Recent studies show that strong social connections, performing complex work and having a higher level of formal education help build resilience to age-related cognitive decline and dementia; however, they do not guarantee immunity from this disease.

What is most perplexing about Alzheimer’s is that you can live a healthy, active life with no genetic risk and still develop the disease, explains Elbein. “It’s the only one of the top 10 diseases that kill people in America that doesn’t have known prevention management.”

Although there is no cure for Alzheimer’s, adopting a healthy lifestyle is still the best way to cut your risk of diseases associated with Alzheimer’s, including diabetes and cardiovascular disease.

If you notice repeated cognitive issues, it’s important to see your doctor immediately to identify the cause, says Elbein. It could be as simple as not getting enough sleep or thyroid deficiency. If it is Alzheimer’s, early detection can help you manage your symptoms and maintain a higher quality of life for an extended period.

Women have 50 percent greater risk, African-Americans have double the risk and Latinos have one-and-a-half times higher risk of developing Alzheimer’s disease than the general population; however, it affects people of every race, gender and socioeconomic level.