Skip to content
Home Topic Health and Wellness Does Green Tea Cut Your Risk of Cancer?

Does Green Tea Cut Your Risk of Cancer? 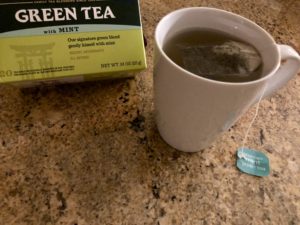 For centuries, people have been drinking green tea for medicinal purposes—from improving brain function and digestion to losing weight and preventing cancer.

Green tea is loaded with powerful antioxidants called polyphenols. These antioxidants reduce free radicals in the body, which contribute to aging and a wide range of diseases.

A newly published study in the journal “Metabolomics” sheds light on how green tea might work in fighting or preventing pancreatic cancer. A powerful antioxidant in green tea, called EGCG, disrupts the metabolism of cancer cells by suppressing the expression of an enzyme linked to cancer.

“Drinking green tea is part of a healthy lifestyle choice that has scientific basis,” says Dr. Wai-Nang Lee, a Los Angeles BioMed researcher and author of the study. “We’re not talking about getting an infusion of green tea, and then your cancer will go away.” Instead, he recommends drinking a couple of cups of green tea daily in conjunction with current cancer therapy.

Lee explained how green tea’s active component could help prevent cancer, which opens up a lot of new cancer research using compounds that people may have not thought about, including other natural food products such as pomegranates, onions or spices.

Lee’s study adds to a large body of research showing the potential health benefits of green tea. Numerous studies have also found an association between green tea and a lower risk of breast, skin, lung, colon and bladder cancer. But before you start downing eight cups of green tea a day, consider that most of these studies are observational in nature and do not necessarily prove cause and effect.

“Green tea is a beverage that’s calorie-free, sodium-free, and if you enjoy the taste that’s great. But don’t forget the rest of the healthy eating pattern,” says Katherine McManus, dietitian and director of nutrition at Brigham and Women’s Hospital in Boston.

Both Lee and McManus suggest drinking green tea in moderation and discourage the use of green tea extracts, which are concentrated compounds that could cause side effects such as kidney stones or liver problems. Drinking excessive amounts of caffeinated green tea can cause jitteriness, nausea and insomnia.

“There’s not one food or beverage that makes us healthy. It’s the totality and synergy of a healthy eating pattern,” says McManus. “If you’re just having green tea on top of the Standard American Diet, good luck to you.”