How to Overcome Disabilities through Yoga 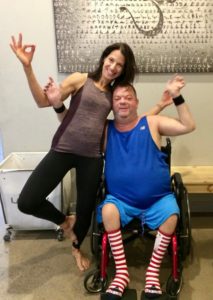 The first time I saw Shawn Sullivan roll up in a wheelchair to a power yoga class, I figured he must have misread the schedule. I had just laid out my mat and was ready to take a challenging hot vinyasa class loaded with pushups, complicated arm balances and inversions.

I watched perplexed as two people lifted Shawn out of his wheelchair and placed him on a mat in the center of the room. We started class seated on our mat, connecting with our body and breath. As I looked over at Shawn, I noticed that he sat in stillness, eyes closed with a tall spine and slight tuck of his chin like a soldier awaiting orders from his lieutenant – alert, aware and in perfect alignment.

The teacher directed us to move to our hands and knees, lift our right leg and circle our ankle. At this point, I expected Shawn to leave class, but instead he remained seated and lifted his right arm in the air and circled his wrist, modifying the pose exquisitely. Although the poses gradually became more challenging, Shawn maintained a sense of calmness and one-pointed focus as he creatively tailored the poses to accommodate his weakened arms and legs.

After class I talked with him and learned that he has been practicing yoga for the last eight years. “When I’m on my mat, I feel at peace. All of my fears melt away and all my limitations are gone,” says Shawn, who attends yoga classes daily at LifePower Yoga in Scottsdale, Ariz.

Shawn has a form of muscular dystrophy called Charcot-Marie-Tooth, which slowly and progressively damages the nerves in the hands, arms and lower legs. He was also born with optic nerve damage, rendering him legally blind.“When I sit on the floor in yoga class, the people in class automatically look at me because I do the poses differently from them,” says Shawn. “I knew from the beginning that I was different. I’ve never been able to run, ride a bike, climb trees – none of that kid stuff.”

Fighting the Disease and Disabilities
In high school, Shawn was unable to learn to drive like his friends. After school, he sat on the sidelines watching with envy as his friends played football, soccer and ran track. Throughout his teen years, he drank alcohol to numb the fear and anguish of having a disease that has no cure. His condition was slowly worsening, despite multiple surgeries. By the age of 16, he walked with a cane. Although his body was ailing, he was gifted with a sharp mind and excelled in school, eventually graduating from college with two degrees. After graduation, his sense of isolation and anger deepened when he applied for jobs and no one would hire him because of his disabilities. He began to drink more heavily and became an alcoholic. By age 30, he was confined to a wheelchair. “I felt useless and kept on drinking.”

Triumphing Over Addiction
After decades of drowning his fears and frustrations in alcohol, he finally came to terms with his addiction.
“I looked in the mirror and didn’t like the person I had become. I was living in hell.” At 33, he stopped drinking and started attending Alcoholics Anonymous meetings. He also began sponsoring other alcoholics to help them through their recovery. Although he was now sober, Shawn still felt different from those around him. At sporting events, he disliked having to sit in the handicapped section separated from the rest of the crowd. While everyone else walked around, drove their cars and played sports, he sat motionless in a wheelchair. “Disabled people don’t get out of the chair. We are stuck there from morning ‘til night,” says Shawn. “When you have physical limitations, you think you can’t do anything. You live in fear.” 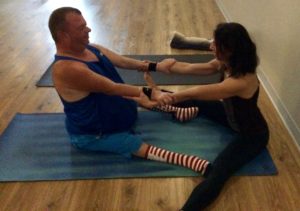 A major turning point in Shawn’s recovery came eight years ago, when one of his physical therapists moved him out of his wheelchair and on to the floor to try some yoga poses. Getting out of the chair was an exhilarating and liberating experience for Shawn, and he quickly became hooked on yoga and started attending group classes. “Yoga makes me feel connected to everyone around me. When I go to class, I sit with all of you and I don’t feel separated,” he says. “I’m healthier now than I’ve been in my whole life.

Shawn’s disease typically worsens over time, causing a gradual loss of strength and sensation in the extremities. But over the last eight years, yoga has helped strengthen and stretch his entire body and improve his balance and posture.

“Before yoga, he just kind of slumped in his chair because he was told he had a defective body and it was only going to get worse,” says Matt Taylor, Shawn’s physical/yoga therapist. “But now his whole relationship with his body has been dramatically improved. Yoga is not curing him, but because he is putting a demand on his nervous system
every day, he is seeing positive changes.” Yoga has helped Shawn regulate his sleep cycle, digestive system, and control his diabetes. But the benefits have gone far beyond the physical. He has also found a sense of belonging that he has been searching for all his life.

“I think a big reason Shawn comes to class is to be a part of a community where people are understanding and supportive of his situation,” says Anton Mackey, one of Shawn’s longtime yoga instructors. “He takes in the energy of the room, listens to what the teacher is offering on a deeper spiritual level and finds peace with where he is.” Many of the students have befriended Shawn and greet him by name with fist bumps and hugs.

The Power of Purpose and Positive Attitude 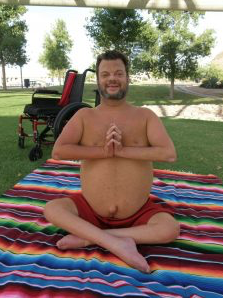 Shawn’s regular yoga practice and positive attitude help him let go of fears about his health and stay focused on the present. “When I drank, I thought about the future, and I didn’t like it. Mentally, yoga keeps my mind thinking that I’ll be alright. You can’t control or know what the future is, but I know God will take care of me.”

Last fall, Shawn’s massage therapist, Lindsey Hoffman, invited him to one of her classes at an addiction treatment center, so he could share how yoga has changed his life. “Before I had him coming to my yoga class, it was a big challenge to get people to participate. Eighty percent of the patients would come up to me and say, ‘I have a headache’ or ‘I have hemorrhoids.’ Any excuse to get out of it.” Now when students come to her yoga class she never hears complaints when Shawn is present. “He probably does more for them than I do, quite frankly, just in being there,” says Lindsey.

At 51, Shawn says his life purpose is to help people struggling with disabilities and addictions. He has earned the nickname “Reverend Wheels” because he loves sharing his story and passion for yoga. This spring, he will be releasing a personal documentary to help motivate more people to do yoga.

“If a guy in a wheelchair can do yoga, anyone can. Everyone’s body is different, but you just do it. You keep showing up,” says Shawn. “Yoga makes me feel a part of something greater than myself – and now yoga is my job.”