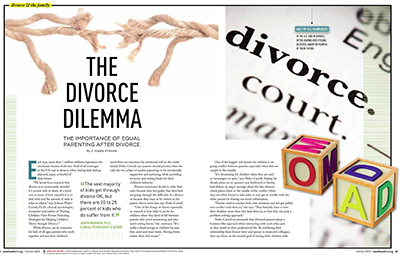 Each year more than one million children experience the emotional trauma of divorce. Half of all marriages in the U.S. end in divorce, often leaving kids feeling dejected, angry or fearful of their future.

“We know from research that divorce is so enormously stressful. It’s second only to death of a loved one in terms of how stressful it is to deal with and the amount of time it takes to adjust,” says JoAnne Pedro-Carroll, Ph.D., clinical psychologist, researcher and author of Putting Children First: Proven Parenting Strategies for Helping Children Thrive through Divorce.

While divorce can be traumatic for kids of all ages, parents who work together and put their children’s needs first can minimize the emotional toll on the entire family. Pedro-Carroll says parents should practice what she calls “the two pillars of quality parenting”: to be emotionally supportive and nurturing while providing structure and setting limits for their children’s behavior.

Parents sometimes decide to relax their rules because they feel guilty that their kids are going through the difficulty of a divorce or because they want to be viewed as the parent who is more fun, says Pedro-Carroll. “One of the things we know repeatedly in research is how risky it can be for children when they kind of fall between parents who aren’t monitoring and who aren’t setting limits…It’s really a disadvantage to children because they need and want limits. Having limits makes them feel secure.”

One of the biggest risk factors for children is on-going conflict between parents, especially when kids are caught in the middle. “It’s devastating for children when they are used as messengers or spies,” says Pedro-Carroll. Asking for details about an ex-spouse’s new boyfriend or having kids deliver an angry message about the late alimony check places them in the middle of the conflict where they are often forced to take sides or may get in trouble with the other parent for sharing too much information.

“Parents need to contain their own emotions and not get pulled into conflict with their ex,” she says. “They basically have to love their children more than they hate their ex, so that they can pick a problem-solving approach.”

Pedro-Carroll recommends that divorced parents adopt a business-like approach when interacting with each other, just as they would in their professional life. By redefining their relationship from former lover and spouse to respected colleague, they can focus on the mutual goal of raising their children with consistent rules and values. Assuming they are both fit to parent, they should be supportive of their children having a healthy relationship with both of them.

When parents fail to set aside their differences, the consequences of divorce can be far-reaching: “Children from divorced families are two to three times more likely to drop out of school and the risk of teen pregnancy is double that of youth from non-divorced families,” says Pedro-Carroll. “And young adults from divorced families marry earlier, report more dissatisfaction with their marriages and are more likely to divorce than peers from continuously married families.” But she is quick to point out that the majority of kids get through divorce without any more problems than kids whose parents stay together.

“The vast majority of kids get through divorce okay, but there are 20 to 25 percent of kids who do suffer from it,” says Joseph Nowinski, Ph.D., clinical psychologist and author of The Divorced Child: Strengthening your Family through the First Three Years of Separation. When divorced parents continue to clash, kids often suffer from depression and anxiety, have trouble maintaining friendships and fall behind in school, he says.

Nowinski cites two large-scale longitudinal studies that show that 25 percent of kids from divorced families have serious social, emotional or psychological issues, compared with only 10 percent from intact families.

The first three years following divorce is the most critical period for acclimating your children to the family changes created by the separation, according to Nowinski. How ex-spouses treat each other has a major impact on how well kids adjust to the divorce. When parents constantly bad-mouth and blame each other and disagree on house rules, it takes an emotional toll on the kids.

“Your children are getting this divorce, too,” says Nowinski. “Regardless of how you feel about each other or the causes of your divorce, if you want to make sure your children aren’t one of the 25 percent, it’s important for you to make some compromises and find some common ground.”

Divorcing parents can create a smoother transition by meeting the individual needs of their children based on age. Nowinski says kids from one to five years old need a strong, secure attachment to their parents. At this age, they thrive on routine and predictability – for example, having regular bedtimes and knowing in advance when they will be seeing mom or dad.

Pedro-Carroll says young children often worry about who will take care of them after the divorce. “They have fears of abandonment that if the marital bond could end, what’s the guarantee that mom and dad will continue to love me?”

For school-age kids from six to eleven years old, literacy and socialization become the critical developmental tasks. “Research shows that kids who are not reading up to par by third grade, their prognosis is significantly poorer for even graduating high school,” says Nowinski. “Here’s the problem with divorce: It becomes very stressful. The parents’ lifestyles often change, and it’s easy for school to get lost in the shuffle. It’s not as though a mom or dad doesn’t care about their kid, but they may feel so overwhelmed that they don’t oversee the homework as much, and they don’t stay in touch with the teacher. They just don’t have the time.”

During the elementary school years, kids also start to reach out and develop friendships. At this stage, playdates take on greater importance. Nowinski advises parents to coordinate get-togethers with their children’s friends on a regular basis and plan around their visitation schedule.

As kids reach middle school and high school, identity development and communication take on more importance. “Adolescents tend to be secretive boys and girls, so parents can falsely assume that everything’s fine,” warns Nowinski.” Ex-spouses need to be on the same page when it comes to enforcing rules such as curfews and a zero tolerance for drug and alcohol use.

As kids hit adolescence, they start to question who they are and what their future looks like. Parents should maintain an on-going dialogue with their teens about family values and what their interests are. “Who they hang out with, their peer group and their friends, helps define who they are,” Nowinski says.

Kids of all ages benefit from a stable home environment. Whenever possible, parents should try to minimize changes to their routines. Keeping the same school, friends and weekly schedule creates continuity and a sense of security for them during a turbulent time in their lives.

Some changes may be unavoidable, such as shuttling kids between two households. To minimize the stress and inconvenience, make sure they have clothes and toys in both places and a room or space they can call their own.

Maintaining rituals and holiday traditions can also provide comfort to kids. Nowinski encourages parents to continue family traditions such as celebrating birthdays or attending family gatherings during the holidays.

Divorce can be emotionally trying for all members of the family, but before parents can help their children, they must first take care of themselves. “One of the most important things to do when we’re under stress, and particularly for parents going through such a major life change, is to take good care of themselves emotionally, physically and spiritually …and to understand that asking for help when we need it is a sign of strength,” says Pedro-Carroll.

Aggression, social withdrawal, depression or a significant drop in school grades may indicate that children need outside help from a professional counselor. Parents should also reach out to friends, neighbors, clergy and extended family for support.

“Divorce does put children at risk for emotional and behavioral problems; however, those risks are not inevitable,” says Pedro-Carroll. “We need to remember that there are many, many children, after that initial period of adjustment, that get back on track and can be quite healthy and well-adjusted. And one of the biggest factors in how children fare over time is how their parents go about handling the family changes and the quality of the family life they put into place during and after a divorce.”

Perhaps the simplest and most powerful thing parents can do is spend one-on-one time with each of their children. Taking the time to listen to them and respond with empathy sends the message that they are valued.

Although divorce marks the end of a marriage, the parents’ responsibilities continue. When ex-spouses work together and maintain consistent rules and a nurturing, open relationship with their children, they help create a healthy, safe family life where kids feel loved and secure.