As Stereotypes Fall, More Men Are Falling for Yoga 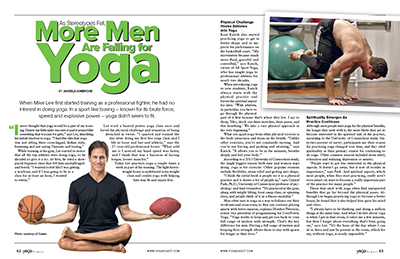 When Mike Lee first started training as a professional fighter, he had no interest in doing yoga. In a sport like boxing – known for its brute force, speed and explosive power – yoga didn’t seem to fit.

“I never thought that yoga would be a part of my training. I knew my little sister was into it and it seemed like something that was just for girls,” says Lee, describing his initial reaction to yoga. “I had this idea that yoga was just sitting there cross-legged, Indian style, humming and just saying Namaste and leaving.”

While training at his gym, Lee started to notice that all the top athletes were doing yoga, so he decided to give it a try. At first, he tried a slow-paced beginner class that left him unchallenged and bored. “I wanted to feel like I was getting a workout, and if I was going to be in a class for at least an hour, I wanted to sweat.”

Lee tried a heated power yoga class next and loved the physical challenge and sensation of being drenched in sweat. “I sparred and trained the day after doing my first hot yoga class and I felt so loose and fast and athletic,” says the 27-year-old professional boxer. “What sold me is I noticed my hand speed was faster, and I think that was a function of having longer, looser muscles.”

Today Lee practices yoga a couple times a week as part of his training. The light heavyweight boxer is undefeated in his weight class and credits yoga with helping him stay fit and injury-free.

Kent Katich also started practicing yoga to get in better shape and to improve his performance on the basketball court. “My movements became much more fluid, graceful and controlled,” says Katich, owner of All Sport Yoga, who has taught yoga to professional athletes for nearly two decades.

When introducing yoga to new students, Katich always starts with the physical practice and leaves the spiritual aspect for later. “With athletes, in particular, you have to go through the physical part of it first because that’s where they live. I say to them, ‘Hey, check out these stretches, these poses, and this breathing.’ We take a very physical approach in the very beginning.”

What sets apart yoga from other physical exercise is the body awareness and focus on the breath. “Unlike other exercises, you’re not constantly moving. And you’re not forcing and pushing and straining,” says Katich. “It allows you to be in the moment, breathe deeply and feel your body.”

According to a 2013 University of Connecticut study, the single biggest reason both men and women start doing yoga is for exercise. Other popular reasons include flexibility, stress relief and getting into shape.

“I think the initial hook is people see it as a physical practice and it draws a lot of people in,” says Crystal Park, Ph.D., University of Connecticut professor of psychology and lead researcher. “It’s practiced at the gym, along with weight lifting, boot camp class, or spinning class, and people think of it as a fitness modality.”

Men often turn to yoga as a way to balance out their workouts and cross-train, so they can continue playing sports with fewer injuries, explains Heather Peterson, senior vice president of programming for CorePower Yoga. “Yoga works to keep and get you back to your full range of motion with strength. That’s the key difference for men. Having a full range of motion and keeping their strength allows them to stay with sports for longer in their lives.”

Although most people start yoga for the physical benefits, the longer they stick with it, the more likely they are to become interested in the spiritual side of the practice, according to the University of Connecticut study. Sixty-two percent of survey participants say their reason for practicing yoga changed over time, and they cited spirituality as their primary reason for continuing to do yoga.  Other common reasons included stress relief, relaxation and reducing depression or anxiety.

“People start to get less interested in the physical aspects. It doesn’t go away, but it sort of recedes in importance,” says Park. And spiritual aspects, which most people, when they start practicing, really aren’t even aware of, start to become a really important part of the practice for many people.”

Those that stick with yoga often find unexpected benefits that go far beyond the physical poses. Although Lee began practicing yoga to become a better boxer, he found that it also helped him quiet his mind and relax.

“I always have to be thinking and doing a million things at the same time. And what I do like about yoga is when I get in that room, it takes me a few minutes, but then I forget about everything that’s been going on,” says Lee. “It’s the hour of the day where I can sit in there and just be present in the room, which for me, without yoga, is nearly impossible.”

Like Lee, Katich continues to stretch and strengthen his body through yoga, but he has also integrated meditation and breath awareness into his daily life to keep him more fully present and less reactive in tense situations. “I do my best to take that one deep breath before I respond and give space between a thought and impulse as opposed to flying off the handle.”

As they continue their yoga practice, many of his students start to look for more than just a simple stretch and a sweat. Before a recent basketball game at Madison Square Garden, Katich was thrilled when one of his students pulled him aside and asked if they could find a quiet place to meditate, so he could calm his mind and get centered before the game.

“In the last five to 10 years, athletes are coming to me a lot more asking for the meditation side of it, I think because there’s so much more information now, and some of the stereotype has been stripped away, so they’re not afraid of it anymore. It’s not some weird cult that’s in a closet,” says Katich, who has worked with a large number of pro athletes including baseball player Giancarlo Stanton and NBA superstars Kevin Love, Blake Griffin and Dirk Nowitzki. “Yoga gives them a sense of confidence and empowerment.”

During the last few years, Peterson has seen an increase in the number of men attending CorePower yoga classes at over 100 studio locations around the country. “Our studies have shown that students come in for the workout and stay for the inner peace that they experience as a result of our classes,” she says. “Inner connection and peace allow you to be more present under all conditions. You are more present when your children are crying, more present and patient when the checkout line is long, more present and patient when there is a backup on the freeway…If you show up more in the relationships, every relationship is improved.”

And the more you show up on your mat, the more likely you are to show up for the important people in your life.