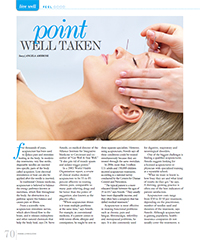 For thousands of years, acupuncture has been used to reduce pain and create healing in the body. In modern-day treatments, very fine sterile, disposable needles are inserted into specific parts of the body called acupoints. Low electrical stimulation or heat can also be applied after the needle is inserted.

According to traditional Chinese medicine, acupuncture helps balance the energy pathways known as meridians, which flow throughout the body. An obstruction in the pathway is believed to upset the balance in the body and cause pain or illness.

In the A scientific view of acupuncture shows that Modern medicine adopts a more scientific view: “Acupuncture stimulates nerves, altering blood flow in the brain, as well as releasing both endorphins, the body’s natural painkillers, as well as other natural chemicals that help the body heal.” says Steve Amoils, M.D., co-director of the Alliance Institute for Integrative Medicine in Cincinnati and co-author of Get Well & Stay Well. “It also gets rid of muscle spasm and sedates trigger points. New research shows that acupuncture also works through the fascia, the white sinewy material that surrounds muscles and blood vessels throughout the body.”

In the 2003 World Health Organization report, a review of clinical studies showed acupuncture to be 55 to 85 percent effective in treating chronic pain, comparable to many pain-relieving drugs and far better than the power of suggestion, known as the placebo effect.

“Where acupuncture shines is it treats multiple problems at the same time,” says Amoils. For example, in conventional medicine, if a patient comes in with tennis elbow, allergies and constipation, he might be sent to three separate specialists; however, using acupuncture, Amoils says all three conditions could be treated simultaneously because they are treated through the same meridian.

In 2006, more than three million U.S. adults and 150,000 children received acupuncture treatments, according to a national survey conducted by the Centers for Disease Control. “The typical patient is a more educated female between the ages of 35 to 65,” says Amoils. “They usually have more disposable income, and they often have a symptom that has defied medical treatment.” Acupuncture is most effective in treating functional problems such as chronic pain and fatigue, fibromyalgia, infertility and menopausal problems, he says. It is also commonly used for digestive, respiratory and neurological disorders.

One of the biggest challenges is finding a qualified acupuncturist. In the U.S., licensed acupuncturists, chiropractors, naturopaths, and medical doctors all perform acupuncture, and it may be difficult to assess skill levels. Amoils suggests looking for a licensed acupuncturist or physician with specialized training at a reputable school. “What we want to know is, how busy they are, and what kind of results do they get,” says Amoils. A thriving, growing practice is often one of the best indicators of patient satisfaction.

Acupuncture costs can range from $50 to $150 per treatment, depending on the practitioner, number of needles used and duration of the treatment, says Amoils. Although acupuncture is gaining popularity, health insurance companies do not usually cover the treatments.

A 2012 Bravewell Collaborative Study shows that integrative medicine has become “an established part of health care in the United States.” Integrative medicine combines the best of modern science with traditional alternative therapies to treat the whole person from a mind, body and spirit perspective. The study surveyed 29 leading integrative clinical centers throughout the country, including the Integrative Medicine Program at Mayo Clinic, one of the most respected healthcare providers in the world.