Skip to content
Home Topic Health and Wellness Bad Habit or Addiction? How to Tell the Difference

Bad Habit or Addiction? How to Tell the Difference

Jennifer White* was a 36-year-old avid runner. At first, she started running to maintain a healthy weight, but as time went on, she started increasing the number of miles and days she ran until she was running every day of the year, through rain, sleet and snow and through painful injuries. She continued to run even when she caught a cold or the flu. Her obsession with exercise and rigid schedule put a serious strain on her relationships and led to the breakup with her long-time boyfriend.

Habits are a natural part of life, but as with Jennifer, any habit can turn into an addiction when taken to an extreme. The difference between a habit and an addiction is not black and white, but a matter of degrees, according to Joseph Nowinski, Ph.D., clinical psychologist at University of Connecticut and author of “Almost Alcoholic.” At one end of the spectrum are normal habits and at the other end are full-blown addictions. In the middle is a gray area that becomes a danger zone when the activity or substance starts interfering with your life.

The most well known addictions involve alcohol and drugs, but compulsive behaviors such as gambling, sex, food, exercise, work and Internet use are gaining attention in the psychiatric community as they become more widespread.

Addictions are characterized by an obsession with the drug or activity, failed attempts to cut back or stop, and a negative impact on one or more areas of your life such as your health, relationships, finances, job or school. They cause physical changes in your brain that interfere with your decision-making skills and impulse control, leading to major life consequences.

Addictions Interfere with Your Life 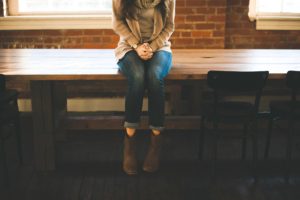 “Addictions rarely happen suddenly, unless it’s something like heroin,” says Nowinski. “Generally, they creep up on you.” For example, you may start drinking a glass or two of wine to de-stress after work. Over time, you start having three, four or five glasses to achieve the same calming effect and start drinking earlier in the day.

You know you’re on the road to addiction when a substance or behavior starts taking over your life and squeezes out time with family and friends, says Nowinski. He asks parents to look at a child’s life as a pie chart: “How is your child’s life divided among different things, and does one thing seem to take it over? That can apply to parents, too. Is work taking over your life? Do you come home and open the laptop and just continue working, and you don’t have any family life?”

One of the big differences between addictions and habits is the difficulty in overcoming them. “You can break a habit with willpower because there’s nothing deeper to it. It’s like pulling out a little shell from the sand. It’s not deeply rooted,” says Dr. Lance Dodes, former assistant clinical professor of psychiatry at Harvard Medical School and author of “Breaking Addiction: A 7-Step Handbook for Ending Any Addiction. In contrast, addictions are very difficult to eradicate. “It’s like pulling out a tree stump, which has roots that are going 15 feet under the ground…Addictions are deeply driven and they always are serving a psychological function for you.”

A person may develop an addiction to cope with intense stress or feelings of overwhelming helplessness. Dodes describes addictions as compulsions that provide a sense of relief to the addict and an indirect solution to a problem.

Internet and Food Addictions: Too Much of a Good Thing

In moderation, sex, food, work, exercise, shopping and Internet use are considered normal healthy behaviors, but when they become excessive, they can jeopardize all aspects of your life.

For example, playing video games for a couple hours a day is considered a normal habit. But when a kid starts doubling or tripling his screen time, turns down invitations to hang out with friends and starts isolating himself, he is clearly entering the danger zone.

“How much technology is too much? That’s all we’re really asking, and that’s where the debate lies,” says Kimberly Young, Ph.D., psychologist and founder of the Center for Internet Addiction. “Is unlimited access good for anybody? And when you’re young and you haven’t developed reading or social skills, is that really a good thing?”

Young advises parents to set time limits with all electronic devices and to avoid using them as an electronic babysitter. Without any parental supervision or limits, kids run the risk of becoming addicted. For example, one teenager crashed his car five times because he couldn’t stop texting and driving. Another boy was so addicted to video games, that he developed blood clots in his legs from sitting in the same position every day.

Just as too much screen time can be detrimental, so can too much food. “Food addiction is characterized by obsession with food, obsession with weight, and loss of control over the amount eaten,” says Kay Sheppard, M.A., licensed mental health counselor and author of “Food Addiction: The Body Knows.”

Eating to the point of pain and feeling guilt, shame or depression are signs that your eating habits are out of control. According to a study from the Centers for Disease Control and Prevention (CDC), poor eating habits and physical inactivity are the No. 2 cause of preventable death in the U.S., second only to smoking.
The CDC reports that 1 in every 3 adults is obese and nearly 1 in 5 children between 6 and 19 years old are considered obese.

“But not all obese people are food addicts, and not all food addicts are obese,” warns Sheppard. Someone obsessed with food who bounces from one crash diet to the next may not look overweight, but may still have an addiction.

Research shows that foods that are high in sugar, salt and fat – such as cookies, ice cream, pizza, French fries and chips – are designed to create cravings and trigger brain responses that are similar to the brain’s response to drugs and alcohol.

Drug Use Opens Door to Addiction

One of the most prevalent addictions in older kids is drugs and alcohol. Addiction can occur with any mood-altering substance, and the faster it takes effect, the greater the chance of addiction, according to Dr. Scott Teitelbaum, medical director of the University of Florida, Florida Recovery Center and author of “Addiction: A Family Affair.” 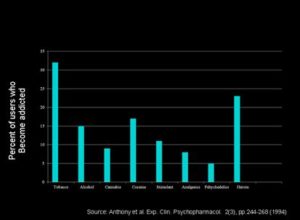 Some people may start using drugs or alcohol as a way to self-medicate and relieve the symptoms of an underlying condition such as depression, anxiety or Attention Deficit Hyperactivity Disorder (ADHD). People with depression often turn to stimulants, while individuals suffering from bipolar disorder, ADHD or chronic anxiety may be drawn to the calming effects of alcohol or pain medication.

The risk of addiction varies depending on the substance. The nicotine found in cigarettes and chewing tobacco ranks as one of the most addictive drugs, with about 30 percent of people who try it becoming addicted, followed by heroin, cocaine and alcohol. Contrary to popular opinion, stimulants and marijuana are addictive. About 10 percent of people who use marijuana will develop a chemical dependency.

Substance use does not necessarily lead to addiction or problem use, but trying any drug or alcohol increases the risk. As the quantity and frequency of use increases, a social drinker or recreational drug user starts to move toward addiction. Delaying the first use of drugs or alcohol can dramatically cut the risk.

“We know that, regardless of genetics, people who start using drugs or drinking before the age of 15 are roughly four times as likely to have an addictive disorder,” says Teitelbaum. “The younger the age, the greater the likelihood of a problem.”

The three most common substance addictions among adolescents and college-age kids are smoking, alcohol and marijuana, according to Ruben Baler, Ph.D., neuroscientist with the National Institute on Drug Abuse (NIDA).

“We know that the brain is a work in progress all the way through your early 20s, so it’s very actively developing,” says Baler. He compares the young developing brain to programming a computer. “What drugs do is they scramble the letters in the keyboard during the actual programming of the computer. That’s why the kind of experiences we have during this period are so critical.”

With kids as young as five or six, the biggest danger is inhalants. Common household items are often used as inhalants, including glue, permanent markers, nail polish remover, gasoline, cleaning solvents, butane cigarette lighters and propellants used in commercial food or cleaning products. They can cause serious brain damage and even death when intentionally inhaled. Because these items are found in practically every home, parents need to educate their children as early as possible about the danger of inhalants. Baler also advises parents to closely monitor their children’s online activity, where they can easily learn how to use these dangerous substances to get high.

On high school and college campuses, experts have seen an alarming increase in marijuana and prescription drug use. With the legalization of marijuana in some states, the drug has become widely available, and its inherent dangers have been drowned out by the voices of politicians and recreational users, says Teitelbaum.

Use of ADHD drugs, such as Ritalin or Adderall, are also increasing among older kids. With fierce competition on high school and college campuses, students often take these psychostimulants to improve their concentration so they can study longer and boost their grades, ignoring the risk of side effects or addiction.

The Nature vs. Nurture Debate

Genetics, early life experiences and environmental factors all play a role in addiction. “Roughly speaking, fifty percent of the contributors to an addiction risk come from our genes and 50 percent from the environment, so they have pretty much equal weight,” says Baler.

Research shows that drug and alcohol addictions do run in families, but they are not inevitable. “Even if you have the worst genetic risk factors from your family, their impact can be counteracted or at least blunted by the right environment,” says Baler. “If you’re in a family with a parental style that sets expectations with support and love and where there is healthy competition and good nutrition and sleep hygiene, and everything else that contributes to the well being of a person, it is much less likely that that person will become a victim of his or her own genes.”

The primary ways kids learn is through example, so if parents make healthy choices and practice moderation in all that they do – drinking, taking prescription drugs, eating, working, exercising and surfing the Internet – kids take notice.

Baler points to several environmental factors that increase a child’s risk of addiction: chronic sleep deficits, peer pressure, stress and poor self-control. Parents should look for signs that their child is struggling or stressed and take time to listen and brainstorm ways to solve any problems.

While you can’t control genetics, you can control the other half of the equation. Creating a loving, nurturing home and modeling healthy behaviors all have a profound influence on the choices kids make.

* Name has been changed to protect the individual’s privacy.