When Compulsive Collecting Crosses the Line 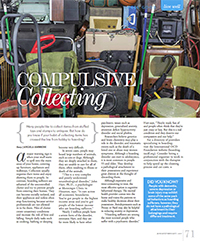 Many people like to collect items – from stuffed toys and stamps to antiques. But how do you know if your habit of collecting items has crossed the line from hobby to hoarding?

A major warning sign is when your stuff starts to spill into the main areas of your home, covering up furniture, appliances and walkways. Collectors usually organize their items and enjoy showing them to people. In contrast, hoarding sufferers are ashamed of the uncontrolled clutter and try to prevent people from entering their homes. They can become socially isolated, and their appliances and toilets often stop functioning because service professionals are not allowed in to fix them. Piles of clutter create unsanitary conditions and increase the risk of fires and falling. Simple daily tasks such as cooking, bathing or sleeping become very difficult.

In severe cases, people may hoard large numbers of animals, such as cats or dogs. Although they are deeply attached to them, they are unable to care for all of them, often resulting in illness or death of the animals.

“This is a very complex and poorly understood neurobiological disorder,” says John Hart, Ph.D., a psychologist at Menninger Clinic in Houston. “It cuts across all economic boundaries. You’ve got people in the highest income areas and you’ve got people of the lowest income who are hoarding sufferers.”

Nearly two million people have a severe form of the disorder, estimates Hart, and they are far more likely to have other psychiatric issues such as depression, generalized anxiety, attention deficit hyperactivity disorder and social phobia.

Researchers believe genetics and brain chemistry may play a role in the disorder, and traumatic events such as death of a loved one or abuse may worsen symptoms. Although a hoarding disorder can start in adolescence, it is most common in people 55 and older. They develop a pathological attachment to their possessions and experience great distress at the thought of discarding them.

Although expensive and time-consuming to treat, the most effective option is cognitive behavioral therapy. The mental health provider comes into the home and trains the patients to make healthy decisions about their possessions. Antidepressants such as Prozac or Paxil may also be helpful in reducing anxiety or depression.

“Hoarding sufferers are among the most scorned people who suffer with a psychiatric disorder,” says Hart. “They’re made fun of and people often think that they’re just crazy or lazy. But this is a real condition and they deserve our compassion and our help.”

For a directory of providers specializing in hoarding, visit the International OCD Foundation website (www.hoarding.iocdf.org). Consider hiring a professional organizer to work in conjunction with the therapist to help speed up the cleaning process and cut costs.

People with dementia, severe depression or brain injury may exhibit some of the same pack rat behaviors as hoarding sufferers; however, they do not have a pathological attachment to their belongings and require different treatment.