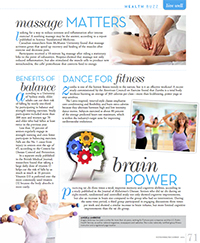 Older adults can cut their risk of falling by nearly one-third by participating in balance and strength training exercises, according to a University of Sydney study. More than 300 men and women, age 70 and older participated in the study and all of them had fallen at least twice in the previous year. Less than 10 percent of seniors regularly engage in strength training and even fewer participate in balancing exercises. Falls are the No. 1 cause of accidental death in seniors over the age of 65, according to the Centers for Disease Control and Prevention.

In a separate study published in the British Medical Journal, researchers found that taking a large daily dose of vitamin D helps cut the risk of falls by as much as 25 percent. University of Zurich researchers examined the results of eight separate studies, involving 2,400 people 65 and older. In order to be effective in reducing falls, Vitamin D must be taken daily in high doses of 700 to 1000 international units (IU). Doses below this amount appeared to have no effect on reducing falls. Vitamin D3 is preferred over the more commonly used vitamin D2 because it is absorbed by the body more easily.

Looking for a way to reduce soreness and inflammation after intense exercise? A soothing massage may be the answer, according to a report published in Science Translational Medicine. Canadian researchers from McMaster University found that massage activates genes that speed up recovery and healing of the muscles after exercise and decreases pain. Participants received a short 10 minute leg massage after riding a stationary bike to the point of exhaustion. Biopsies showed that massage not only reduced inflammation, but also stimulated the muscle cells to produce new mitochondria, the cells’ powerhouse that converts food to energy.

Zumba – Latin-inspired dancing – is one of the hottest fitness trends in the nation, but is it an effective workout? A recent study, commissioned by the American Council on Exercise, found that Zumba is a total body workout burning an average of 369 calories per class – more than kickboxing, power yoga or step aerobics. The interval-style classes emphasize core conditioning and flexibility and burn extra calories because they alternate between high and low intensity dance moves. Subjects exercised at about 80 percent of the average predicted heart rate maximum, which is within the industry’s target zone for improving cardiovascular endurance. More than 112 million people in 125 countries are hooked on this Latin-based fitness craze.

Practicing Tai Chi three times a week improves memory and cognitive abilities, according to a study published in the Journal of Alzheimer’s Disease. Chinese seniors who participated in Tai Chi during an eight-month randomized controlled study not only showed cognitive improvements, but also an increase in brain size compared to the group who had no intervention. During the same time period, a third group participated in engaging discussions three times per week and showed a similar increase in brain volume, but more limited cognitive improvements than the Tai Chi group.