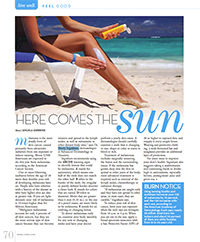 Melanoma is the most deadly form of skin cancer, caused primarily from ultraviolet radiation from sun exposure or indoor tanning. About 9,500 Americans are expected to die this year from melanoma, according to the American Cancer Society.

One or more blistering sunburns before the age of 18 more than doubles your risk of developing melanoma later on. People who have relatives with a history of the disease or who have lighter skin are also at greater risk. If you are white, your risk of melanoma is 10 times higher than for African Americans.

“Malignant melanomas account for only 4 percent of all skin cancers but they are the most serious type of skin cancer because they can become invasive and spread to the lymph nodes, as well as metastasize to other distant body sites,” says Dr. Sherry Ingraham, dermatologist at Advanced Dermatology in Houston.

Ingraham recommends using the ABCDE warning signs to identify lesions that could be melanoma. A stands for asymmetry, which means one half of the mole does not match the other half. B refers to the border of the mole. An irregular or poorly defined border deserves a closer look. C stands for colors that are varied. D refers to diameter. Moles that are greater than 6 mm (0.24 in.), or the size of a pencil eraser, are more likely to be melanoma. E stands for an evolving or changing lesion.

To detect melanomas early on, examine your body monthly for any new or changing moles and have your doctor perform a yearly skin exam. A mole that is changing in size, shape or color or starts to bleed or itch should be carefully examined by a dermatologist.

Treatment of melanomas includes surgically removing the lesion and the surrounding tissue. If the melanoma has grown deeply into the skin or spread to other parts of the body, more advanced treatment is required such as removal of the lymph nodes, chemotherapy or radiation therapy. “If melanomas are caught early and they have not spread to other areas, in most cases, they are curable,” Ingraham says.

To reduce your risk of skin cancer, limit your sun exposure when the sun’s rays are strongest – from 10 a.m. to 4 p.m. When you are out in the sun, apply a broad spectrum sunscreen with a Sun Protective Factor (SPF) of 30 or higher to exposed skin, and reapply it every couple hours. Wearing sun protective clothing, a wide-brimmed hat and sunglasses provides an additional layer of protection. Ingraham also suggests taking a multivitamin and consuming foods or drinks high in antioxidants, especially berries, pomegranate juice and green tea.

Using tanning booths and sunlamps increases your risk of melanoma by 75 percent, and the risk increases with each use, according to the American Academy of Dermatology. Each year, nearly 28 million Americans tan indoors and about 70 percent of them are white females from 16 to 29 years old.