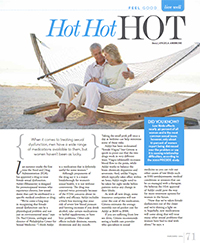 When it comes to treating sexual dysfunction, men have a wide range of medications available to them, but women haven’t been as lucky.

Last summer marks the first time the Food and Drug Administration (FDA) has approved a drug to treat female sexual dysfunction. Addyi (flibanserin) is designed for premenopausal women who experience chronic low sexual desire that can’t be attributed to a specific medical condition or drug.

“We’ve come a long way in recognizing that female sexual dysfunction can be a physiological problem and not just an environmental issue,” says Dr. Paul Gittens, urologist and director of Philadelphia Center for Sexual Medicine. “I think Addyi is a medication that is definitely useful for some women.”

Although proponents of the drug say it is a major breakthrough for women’s sexual health, it is not without controversy. The drug was rejected twice previously because of the FDA’s concerns about its safety and efficacy. Addyi includes a black box warning that your risk of severe low blood pressure and fainting increases if you drink alcohol, take certain medications or herbal supplements, or have liver problems. Other side effects include dizziness, nausea, drowsiness and dry mouth. Taking the small pink pill once a day at bedtime can help minimize some of these risks.

Addyi has been nicknamed “female Viagra,” but Gittens is quick to point out that the two drugs work in very different ways. Viagra (sildenafil) increases blood flow to the penis, while Addyi works to balance the brain chemicals dopamine and serotonin. And, unlike Viagra, which typically takes effect within an hour, Addyi may need to be taken for eight weeks before patients notice any change in their libido.

As with all new drugs, some insurance companies will not cover the cost of the medication. Gittens estimates the average monthly out-of-pocket cost for Addyi at $600 to $900.

If you are suffering from low sex drive, Gittens recommends seeing a healthcare provider specializing in sexual medicine, so you can rule out other causes of low libido including SSRI antidepressants, medical conditions or stressors that can be co-managed with a therapist. He believes the FDA approval of Addyi could pave the way for more treatment options for women in the future.

“Now that we’ve taken female dysfunction out of the closet and we’re shining a light on it, hopefully, new medications will come along that will treat many other sexual problems that women have had to deal with alone.”

Low libido affects nearly 40 percent of all women and is the most common sexual issue; however, only about 10 percent of women report being distressed over the problem or say it is causing relationship difficulties, according to the 2006 PRESIDE study.